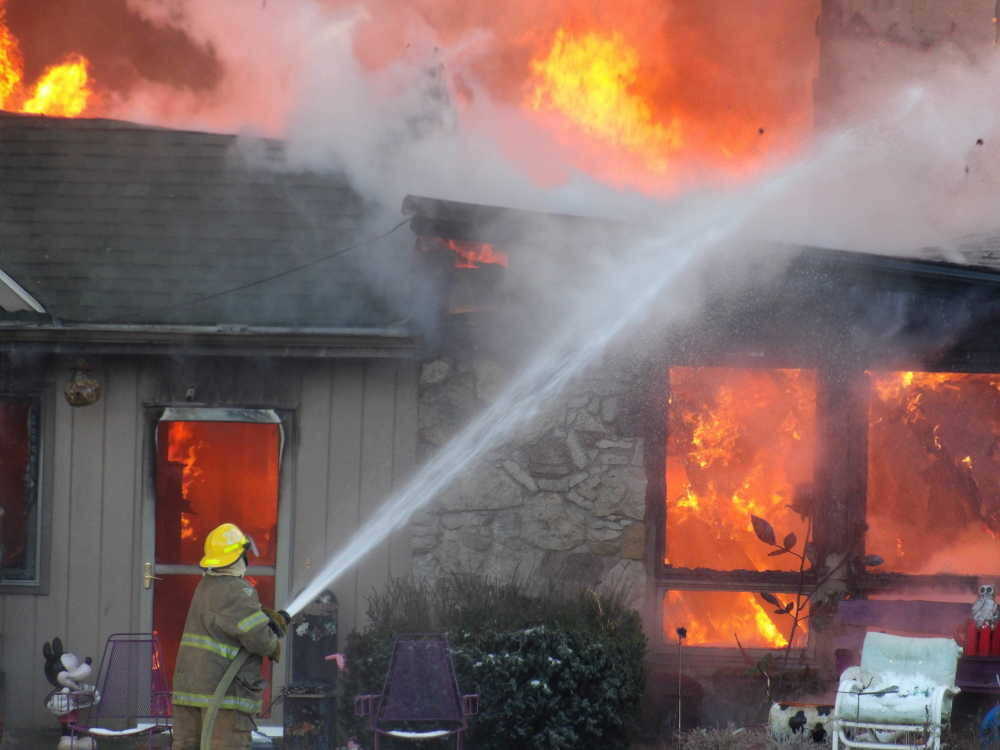 Members of several fire departments responded to a structure fire at a residence located on State Road 340, near the intersection at Twin Beach Road on New Years Day, January 1, 2019.

Live here long enough, someone is bound to tell you how it’s a terrible place. After a few struggles a person can be influenced by that negativity and start to believe maybe the grass is greener on the other side, or perhaps just standing on lawn anywhere else but here would be the better and more reasonable idea.

I don’t agree with that mindset. I am proud of our productive and compassionate community, the people who live and raise their families here. So many of whom offer an extended, helping-hand so others can rise above their tragedy.

I love the “evergreen” and “hopeful” feature stories about people doing incredible things in our community, and beyond.

However, there are problems and tragedy does occur. Over the years I’ve found myself standing in the middle of chaos praying for everyone involved, a few times struggling with my own tears while doing my job. These are not easy stories to write for anyone. They tax a writer’s personal scruples who is attempting to juggle the legal aspect of the job while being factually correct for the reader all at the same time. It’s a job that takes a toll on the spirit. The task isn’t easy by any description, and there are days your mind is left in a state of mush.

Yet, the news never stops. There’s always something going on. It’s a reporter's job to cover those stories and then hope for an easy photo opportunity or a terrific feature story that warms the heart of not only the writer but also the reader. Those are the innocent days a reporter prays and lives for, the “salad days.”

There’s an old idiom, “No news is good news.” Not true for a newspaper reporter, no matter where they work. Big or small newspapers are taking significant hits across the country as social media takes over.

Anyone remember the 1979 song by The Buggles, “Video Killed the Radio Star”?

Interchange the words “video” with television first and then next to the Internet and change “radio star” with newspapers, and that song tells the entire story of the rise of television and Internet factoring into the downsizing of the newspaper industry.

As strange as it sounds, the 1982 song “Dirty Laundry” by Don Henley also foreshadowed future events by spotlighting the callousness of TV news reporting as well as the increasing tabloidization of all news agencies. The song is an eerie prediction of the fallout of the public’s lost trust because of so-called “fake news” at the national levels of journalism.

(Go ahead, Google the songs and listen. I can wait for you.)

Many people believe that covering deaths, disasters, and scandals are what reporters live for and that we all daily salute in the knowledge that “crap is king” and who cares about the consequences.

I don’t know of any smalltown newspaper reporters involved in behavior like that. I can’t speak for what others feel about their journalism careers or the hedonistic world that society is creating for itself, but I do care about the community I live in, a lot.

I imagine there have been chroniclers of history starting before the advent of fire when groups of early Neanderthal Man conversed while huddling together to keep warm. Cave paintings were probably the first written reports of news of the day, information about hunting, crops and what the area was like to be shared with others wandering the earth. This was the earliest ways of communication and writing about history, the news “media” of the day.

The oldest established writing system occurred in ancient in Mesopotamia and Egypt (sometime during 3400 and 3300 BC), in China (around 1200 BC) and much later in Mesoamerica (approximately 300 BC). There’s also a debate about if the undeciphered symbols used on Easter Island (dated around 5,500 BC) or the tortoise-shell carvings in China (dated to 6000 BC) are the first recorded/established writing system.

As the debate continues about who did what first, I think the critical part of the discussion is there were members of ancient societies actively recording and writing about what was happening. They were able to transmit information and share their knowledge with others. It makes sense the ancient Egyptians would establish a way of writing so the work crews would know the “who, what, where, when, why and hows” of the massive projects they completed.

As language and writing excelled during the Renaissance Era of the 1400s interested citizens needed to learn how to read to keep up with the news. The lack of education ensured many people would only “hear the stories,” whether interpreted accurately or not depending upon the source.

One of the first weekly newspapers authenticated by historians was in the Roman Empire during the 1600s, including 21 publications throughout Europe. During the 1700s newspapers grew to more than 40 in Europe. The first newspaper in America started in 1704 with an additional 30 popping up throughout the 13 Colonies of the New World. During the 1800s the need for news in what became the United States caused the industry to triple in size.

In 1846, a Pony Express route bringing news of the Mexican War north faster than the U.S. Post Office could deliver it helped create what is known as the Associated Press (AP). For more than 170 years, the AP has strived to be the first news organization to inform the world of history’s most important moments while upholding the highest levels of ethics and integrity.

The AP also created the standard reference and style guide by which all news writing is measured. Its purpose is to promote uniformity for ease of reading and a common understanding throughout all of news writing and media outlets.

The AP is a source/standard of excellence around the world. So recognition for a job well done by the AP is like being nominated for the “Oscars” of the media world.

It’s even more flabberghasting for a small-town reporter in Brazil, Indiana.

During my career, I’ve had several stories hit the AP. It’s always been amazing to see my efforts being potentially published around the world for others to see. It’s a bit scary, and humbling when you think about that, or at least it is for me.

Recently “Fire and Ice” was recognized and selected as a finalist in the category of Best Photo Story in the 2018 Associated Press Managing Editors Contest. The photos were taken during the rash of house fires on New Years Day 2018. The 24-hour battle wasn’t only against fire. Arctic temperatures made it difficult to work and as night fell, so did the temperatures. Fire engines, hoses, and various other fire equipment froze as firefighters struggled to work in their frozen turnout gear.

It’s difficult to take pictures with numb fingertips while staying out of the way at the various scenes to report what our local first responders were doing. While I had the luxury of going home to sleep in my warm bed, the same exhausted firefighters were back at the job when the fires rekindled and new ones were reported.

As a reporter, I could have considered my job done and moved on to the next story, and there’s always another one waiting. But I couldn’t, out of respect for their courage and tenacity, I went back out to cover “their” story.

Taking over 600 photos, many blurry pictures because of the frozen camera, there were images of courage, perseverance and frozen integrity that only I could see. The best of those were published in the paper and on the website for the public.

When it came time for the contest, for me, I knew only one story was important enough to enter. “Fire and Ice” were registered in several categories with the Best Photo Story being a new category, the first time ever available at the AP awards. Honestly, I struggled with emotions as I wrote the history behind the photos for the judges. The story might have been written by me, the images taken by me, but the story NEVER was about me.

The small bit of celebrity that has come with the potential award is new for me. While I appreciate the congratulations and the praise offered, I feel blessed to be a reporter in my hometown, writing about the news of the day for my neighbors.

However, it indeed is my hope that “Fire and Ice” wins and becomes a part of AP history, the standard bearer as the contest continues on.

Locally, I hope “Fire and Ice” will be something local residents take pride in and hold up to all those “Negative Nellies” out there. Because when our community was faced with a terrible tragedy on January 1, 2018, our first responders rose up to meet it. The proof is in the action taken by its citizens, images captured in pictures that are worth thousands of words. It's an incredible story of what is best about our hometown, our community; all captured for the world to see.