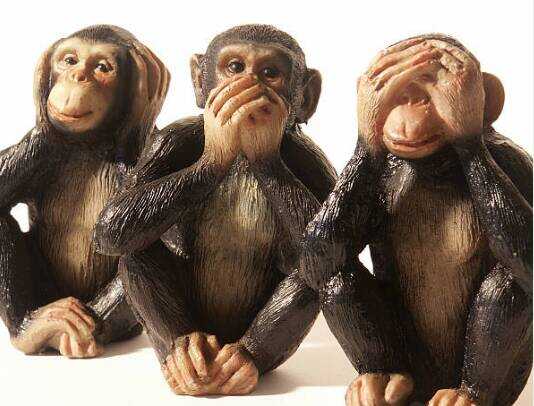 Wise monkeys? Brothers Chimp, Chump, and Champ are pictured without their big brother Dom, according to my Great-grandmother Blanch. (NOTE: They are not in order, but what you expect from monkeys...lol)

Danny Kaye’s version of the 1951 song, “I’ve Got A Lovely Bunch Of Coconuts,” sort of gives away my age, but not in the way you might think.

My great-grandpa Alvin used to sing it all the time.

Great-grandpa Alvin was there, but the three sisters came to visit for two-week intervals to allow him time to rest. I didn’t understand at the time that my great-grandparents were both ill and ultimately dying, but they didn’t want to be anyplace but their home during their final days.

So, I had my own luggage at eight-years-old and was “jet setting” between Carbon, Indiana, and a far-off place called Attica.

I have fond memories of the trips, even during the nasty winter weather. I spent most of the time reading in the back seat, so I never really paid attention to the trip. It seemed to only last a few minutes in my child-like mind.

One of my favorite things about spending time in Attica was my great-grandparents' house. My bedroom had this tall wrought-iron bed that I had to climb a step-tool to reach the top. I loved sitting up there holding a sock monkey toy, my feet dangling over the side, feeling like a princess because there was so much pink in the room. (I still love a tall bed and sock monkeys to this day for the very same reason.)

The house was also decorated with “unique” trinkets that I had never seen before, and I was always excited to search around for treasures. My great-grandmother Blanch would always take the time to tell me the story behind something I found interesting. We would sit on the couch and cuddle under her handmade quilt as she told me stories or watched television.

She always encouraged my reading, often sending home books with me to read. The books were often above my reading level, but she encouraged me to read them, telling me we would talk about the story during my next visit. Each visit, she would ask me questions about what I read. I learned pretty quickly I couldn’t put something past her, like not reading the book. I guess you could say she was my first personal-librarian.

I remember her being a stern woman when necessary, and it didn’t matter if it was a child or an adult. She shared her opinion whether you wanted to hear it or not.

But that didn’t frighten me.

Great-grandma Blanch and my grandma Iva were strong women whom I looked up to. I thought they were two of the wisest women I knew as a child, and here all these years later, I still believe they were.

One lesson they taught me I have never forgotten.

I found a statue in the little house in Attica that not only caught my attention but sparked my imagination: Four wooden monkeys made up the figurine, one large one holding three smaller monkeys in its arms. You could remove the three little monkeys; one covered its eyes, another was covering its ears, and the last one covered its mouth.

I always played with it, pretending it was a mommy with her mischievous babies. They always got into trouble, which is why the mommy had to hug them so tight all the time.

“So, you like playing with Chimp, Chump, and Champ?” Blanch asked me one day.

I didn’t know the monkeys had names, were apparently boys, and I was curious.

Chimp was childish and nosey, which is why its mouth is covered.

Chump was a know-it-all and refused to listen to others, which is why its ears are covered.

Champ doesn’t play well with others, which is why its eyes are covered.

They were small monkeys, brothers really, but they could stir up quite a bit of chaos when left unchecked, without a guardian to watch over them.

That’s where Dom, the name of the big monkey, short for Dominion, comes into the story. He keeps his brothers in his arms to make sure they behave, to protect them.

“They are family,” she explained. “Family takes care of the family. You look out for each other, love one another even when acting childish, won’t listen, or don’t play well with others. That’s when a family needs love the most when it’s not doing its best.”

I loved that little statue; I played with it every time I went to Attica.

The four monkeys and I had many adventures during my childhood, but I grew up and played with bigger toys over time. One day I noticed Dom was missing while visiting my grandparents’ house.

By that time, I knew about the three monkeys’ legend - See, Hear, and Speak No Evil. But Dom was not part of the legend everyone else knew.

Throughout the years, I have tried to find Dom and his brothers’ statue to no avail. Never saw anything that even looked close to my memory.

I have found four monkeys grouping a few times, but it wasn’t the little family of Dom, Chimp, Chump, and Champ. I have had several statues of the three, and sometimes not even as monkeys. But, as odd as it sounds, one of them always seems to wander off to who knows where.

Used to laugh and think, “Causing chaos, I guess.”

However, the world seems a bit upsidedown lately.

There appear to be many Chimps, Chumps, and Champs in the world right now, and not very many big brothers like Dom in society to help stop the chaos with a loving family hug.

I can’t help but think about them while that silly song echoes in the back of my mind...

“I’ve got a lovely bunch of coconuts...

There they are, all standing in a row...

Big ones, small ones, some as big as your head...

Give them a twist, a flick of the wrist...

That’s what the showman said.”