TOP STORY OF THE DAY, brought to you free by WICU: Brazil's Hall, Tuskegee Airmen subject of 'History Channel' documentary

Charles Hall of Brazil was one of the Tuskegee Airmen, the first Black military aviators in the U.S. Army Air Corps (AAC), a precursor of the U.S. Air Force. The legendary group will be featured in a new documentary on The History Channel.

The program debuts at 8 p.m. Wednesday. 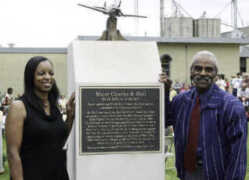 Kelli Ann Hall Jones (left) and Charles T. Hall stand next to the monument dedicated to their father, Charles B. Hall, Saturday, during a ceremony honoring Hall in 2009.
Times file photo

Trained at the Tuskegee Army Air Field in Alabama, they flew more than 15,000 individual sorties in Europe and North Africa during World War II. Their impressive performance earned them more than 150 Distinguished Flying Crosses, and helped encourage the eventual integration of the U.S. armed forces.

In this one-hour special, Robin Roberts explores the legacy of the Tuskegee Airmen, a group that included her father that served in WWII. The program will reveal how these warriors for change helped end segregation in the military and pave the way for the civil rights movement.