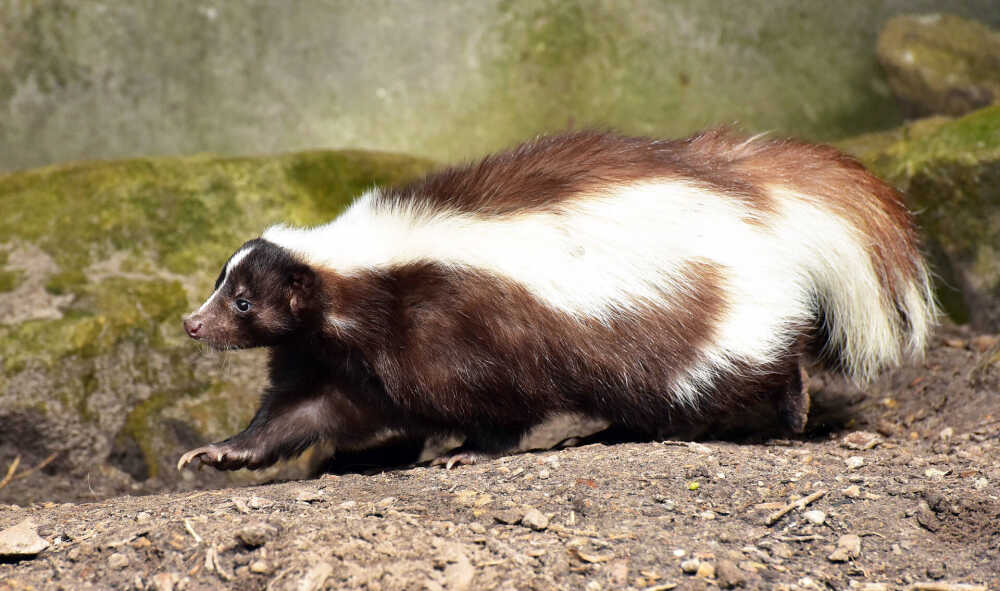 For about a two-week span, I would randomly catch a whiff of skunk smell in the front room of my wife, Kelli, and I’s house from time-to-time during late night hours.

It would trickle in enough to the point where I would boil vinegar for a few minutes. That always did the trick.

Worrying about the possibility of a skunk roaming our neighborhood, I looked up a few ways to possibly keep it away from our house. One of the cheaper and easier options on the list was placing lemon slices around the perimeter of your fence.

Except it didn’t work.

A few weeks ago, on a normal Monday night, I was turning off the TV and the lights in our living room when our four-year-old lab, Finn, walked to the door for what I assumed was his last trip outside to use the restroom before we hit the sheets for the night.

It was 12:30 a.m. and Kelli had to be up in less than five hours to get ready for work the next day, so I debated whether or not to let Finn out or just have him wait for her to do so when she fed him in the morning.

After a few seconds, I thought, ‘What the heck? He’ll only be out there for a few extra minutes. What could it hurt?’

As it turned out, everything.

I opened the back door and let him out. No less than 10 seconds later, Finn was howling as loud as can be. I flung the door back open and yelled for him to get back inside, hoping he hadn’t woken up our one-year-old son, Lincoln, with his shenanigans.

And as he raced back towards me, I smelled the nastiest scent wafting through the August air. Finn got back to the door with bloodshot eyes that were pouring water out of them.

I grabbed ahold of his face and smelled – he had been sprayed by a skunk.

I – not so smartly – let him back into the house to get him out of the backyard where he had his encounter with the animal and raced to wake up Kelli to inform her what had just happened.

Unsure of what to do, we kept Finn laying on a rug under our kitchen table while we searched the internet for answers. Eventually, Kelli figured out a concoction of vinegar, baking soda, water, dish soap and who knows what else that was sure to get the ungodly smell out of our dog’s fur with several latherings of it.

At this point, it’s 1 a.m. and every store is closed. We don’t have half of the ingredients needed for the bath, so I call up my mom. Worried about why I would be calling in the middle of the night, she ran downstairs and found everything we needed.

I threw on a baseball cap and drove over to my parent’s house. Upon walking in their kitchen, she informed me that I wreaked like a skunk. While that shouldn’t have come as a surprise, I didn’t smell it on myself, which would soon be another problem for us.

I went back home and helped Kelli bathe Finn in our garage where he stayed in a cage with multiple fans blowing on him the rest of the night.

We both changed our clothes and got into bed. But by that time, the smell had ripped through our house and had attached itself to everything in sight.

Unable to fall asleep until the sun had risen into the air due to the aroma that had been burnt into my nostrils – and had nearly made me physically ill – I informed Kelli that we had to figure something out. We couldn’t live with the smell of skunk everywhere we turned.

The next day, I made countless calls to various businesses around the Wabash Valley to get some help. We eventually decided our best bet was to have ServePro fumigate our home. They informed us we would have to stay away from our house for a 54-hour time frame while the machine they brought in did its job.

As we – Kelli, Lincoln and I – packed up our things for the next three nights at my parent’s house, we cleaned out our closets and drawers and filled countless trash bags with our clothes, hats, shoes and other belongings that could be washed in a washing machine.

At the end of our stay with my parents, the three of us met the ServePro worker at our home. He let us in to see if we thought the fumigation process had worked.

But the smell lingered ever so slightly. He advised placing multiple plug-ins around the house and burning candles as long as we were home and awake to get the lasting remnants of the odor out the door.

It, thankfully, worked. We bathed Finn again upon his arrival back home after being boarded for three days and have gotten our house back to smelling like it did before the skunk paid an unwanted visit.

Now, once it gets dark out, Finn is in for the night. And if for some reason he keeps scratching at the back door, as to say he really needs to use the restroom, we put him on a leash and head to the front yard for him to do his business in a skunk-less environment.

I’ve yet to figure out where the skunk came from or where he went, but we’ve certainly learned our lesson inside the Ingalsbe house, which includes Lincoln, who makes sure he identifies the skunk in one of his animal books and lets out a loud, ‘Ewww!’ – skunks stink.