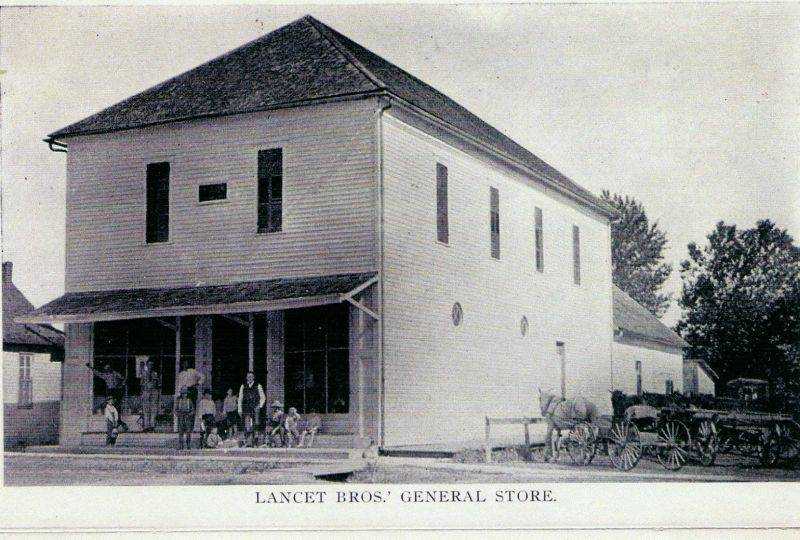 Frank and Peter Lancet, two of three sons of Valentine and Mary Stammer Lancet from Bavaria, began their business as the Lancet Brothers in the late 1800s. Their first store was a one-story building located on the northwest corner of Fourth and Main Street in Center Point. When their business grew too large for that building, they moved into a two-story building at the corner of Gilbert and Main Street with the Independent Order of Odd Fellows leasing the top floor.

The Lancet Brothers’ General Store was a typical country store that housed almost anything one needed from a package of pins to a barrel of salt. The shelves were stocked with groceries, dry goods, notions, jewelry, men’s hats and caps, shoes, hardware items, men’s pants and overalls, gum boots, and felt boots. Felt boots were about one-half to three-quarters of an inch thick and shaped for the foot and leg. They were worn mostly by farmers and men who worked outside. A three-buckle overshoe protected the felt from dirt, snow, mud, and water. In the house the overshoe was removed and the felt boot was worn about the house for warmth.

The store burned down about 1927. By that time the Lodge had not been meeting in it for many years, and the lease had long since been abandoned. A one-story building was built on the original foundation that enclosed a basement.

The land on which the store was built was a portion of the original 40-acres purchased from the U.S. government in 1833 by Beoni Newlin Moss. He & Rebecca Moss sold it in 1837 to Jonathan Davis. It changed hands many times from 1837 to 1886. Lot #103, a portion of the forty acres, was located on Main Street of Center Point. In 1892 Rufus and Mary Kennedy sold the lot to Peter L. and Frank Lancett. In 1898 the Lancets leased the upper floor of the general store to James Burroughs, James H. Strong, and Oscar T. Dunagan, trustees of the Center Point Odd Fellows Lodge #700.

In 1986 Ben Coffman purchased the lot with the original general store to be used by the Clay County Genealogy Society until they were able to purchase it with funds collected through donations, yard sales, income from research, and sales of cemetery books.