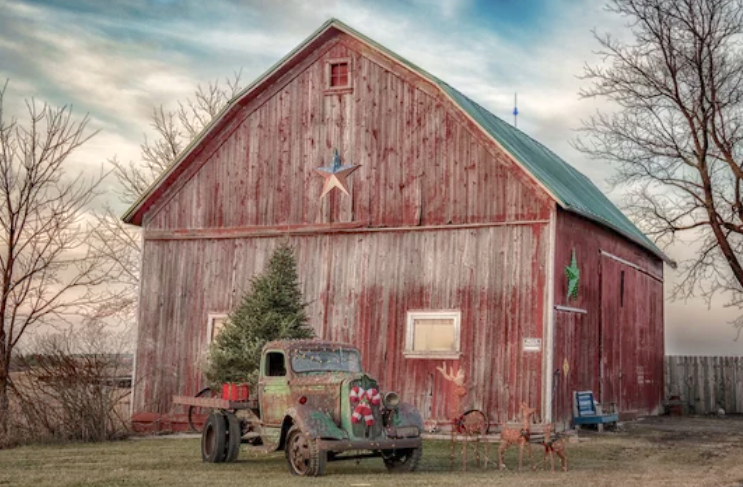 Some say Santa might be dealing with tough sledding if the weather messes up Christmas travel.

I am guessing he wears long underwear and that snow suit looks warm. He’s made his rounds for a very long time and no one has heard of down time at Christmas time for the jolly fat fellow.

Well I am rather fond of the symbol of gift giving that spreads good cheer and delights children and old folks like me. Santa figures surround my tree and all throughout the house : every size, age and origin. If they could tall , all have stories to talk. The oldest , a white milk glass Santa ornament given to my dad at the early age of five, in 1914 has a special place on the tree each year.

My family all love the beauty and magic of the season as most Americans embrace Christmas. It became a federal holiday in 1870.

Thanks to family members we get around. Doctor visits are more frequent now. This year, neither of us have felt our best.

Still with all of the merriment we share we never stray from the true reason we celebrate Christmas. Christ was born on Christmas Day.

Several years ago I wrote a human interest story featured in the By Design section of The Indianapolis Star about a teacher and a little girl with a desire to someday be a writer-Kathryn Howald Myers and me. I received several letters from readers.

Among them was one Wayne Kivetts of Coatsville, a former minister of Wesley Chapel Church, in Clay County. She was a former me member of his church. He and his wife started sending me poetry they penned and I shared mine.

One day the elderly couple showed up in my driveway , in Brazil with a gift to me. It was a bust of Jesus that my teacher Miss Howald painted in a craft class and dated 1978, which I proudly display on one of my curio cabinets.

This poem was included in their folder. I think it best tells us the true reason we celebrate the holiday.

Raising their voices to God of light,

In special blessings for the children of the earth.

Shepherds were alarmed by that star as

Tending their sheep at the fold on the hill,

In wonder, as it shines from afar,

Now watching them move , as if to lead them still.

And so they became a part of this great event,

And their hearts were strangely bold,

Never doubting that God was ever present

Doing the things of which the angels told

Wending their way to Bethlehem town

And finding the mother and baby boy,

Yea , they felt a blessing as they knelt down

Near the manger, filling them with joy.

Kingly gifts they brought to give him,

Incense , gold and myrrh ,they did bring.

Very and only son of God, he died at the people’s whim.

Ever as we wonder at the angels song,

That told of God’s glory and grace,

That gave his only begotten son to save a fallen human race.